Octavien is not a warlock. He is not a cloth wearer. But I absolutely had to show him off here at least once, so let's call this a Cameo Appearance.

Octavien is Anou's true love. He started as her devoted admirer, besotted by her demonic allure and now he has grown ten times more powerful and it is she who harbors that unilateral crush. (Learn more about Octavien.) Unfortunately, Anou must admire him from afar, as they can only communicate through mail and the written word. They will never be together. Poor Anou (/sadface)

Without further ado, here is Octavien in his Pandaren splendor: 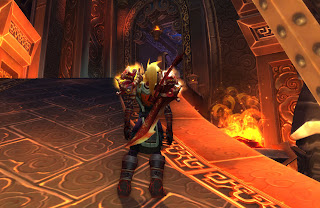 I love the red and gold combination, and there is a hint of purple in the shoulders which carries into the pants and belt (which are a matching set). Lucky for Octavien, the Guild Tabard carries similar colors. Finally, the boots have a silvery-purple gradient in them that compliments the other items, making the look work. I did have a lot of trouble finding something to put on his feet, but I find the end result is pretty good. When I first found these shoulders, all I could think of was Chinese Dragons, so I stashed them in my bank. When MoP hit, I just knew I'd find a use for them!
Posted by Elisa at 11:05 AM