These are the only two screenshots I happen to have of her previous t-mog, and although I could probably get Anou to pose in the outfit again, she's a bit contrary lately and I don't feel like opposing her. (Read: all the stuff is in Void Storage and I don't feel like paying to get it all out and put it all back in again just for some screenshots). /cough 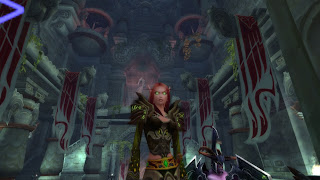 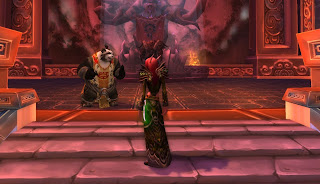 What's nice is that the gloves are invisible when wearing a long-sleeved robe, because basically, they look like really long wrists. A t-moggers dream! :)

Unfortunately, I can't remember what the off-hand was for this set, I think it was Book of Highborn Hymns, but that's because I hadn't changed it from my previous t-mog.

Now, Fang of Venoxis is no longer available in game, so here are two daggers that would easily look just as good: Magaera's Poisoned Fang, but your guild would need to run ToT-H for you to be able to loot an agility dagger; Intricate Spellblade is a randomly dropped green that also looks very, very nice.

Email ThisBlogThis!Share to TwitterShare to FacebookShare to Pinterest
Labels: Transmogrified