Doesn't that sound vile and wicked? Anoukisse the Doomcaller. Muahahahahahaha!

The Doomcaller's Attire is another Warlock-specific tier set that Anou has completed. It is considered tier 2.5 and is still available through quests and reputation with Brood of Nozdormu. A long, long grind, and many scarabs and idols later, Anou also picked up the randomly dropped matching gloves. During this grind she also found Gloves of the Messiah with are the ones I used in the farmer outfit.

I especially love the back side of the dress where the turquoise and gold wings change the whole look of this set. The rest of the gear is rather ordinary actually, especially since it is an exact recolor of the priest and mage tier 2.5. 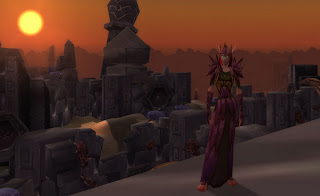 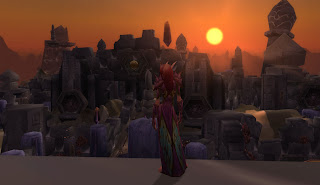 
Clever Anou. She snuck her Red Moth behind her. ;)

The weapons that go with the set, either staff or dagger, are on my list of things to do, but I'm so sick of AQ that I'm not sure it'll ever happen.
Posted by Elisa at 9:11 AM