Here are two other looks for those wanting to put together an Enchantor's outfit or possibly a witch's costume.

This is one of those rare posts where I have chosen not to actually farm the outfits because I have one I very much like and I don't plan to transmogrify this type of look. Not in the near future anyway. That's all Anou needs—more people asking for enchants. ;) 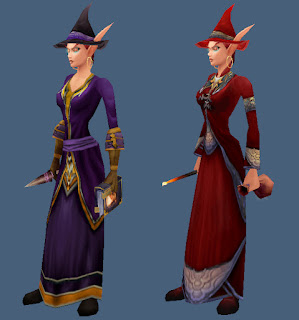 Now, in my defense, when I put these outfits together quite some time ago, I had no idea that the red hat and robe combination were an actual set. I was looking for something that would be relatively easy for anyone to put together, something that matched nicely and wasn't too expensive. Most of these items are either quest rewards or tailored pieces, very easy to find on any realm.

If you're unlucky as I was, Anou had already completed the quests for the hats and missed her chance to save them. Luckily though, a friend led me to a spot where a series of quests end with a reward that is the exact replica of the black and purple one, with the added perk of being a shape-shifting item!

P.S. My Wow Model Viewer is broken with a known yet unfixed bug: Several races keep their eyes closed. Blood Elf females and Night Elf males are two of those.
Posted by Elisa at 8:01 PM

Email ThisBlogThis!Share to TwitterShare to FacebookShare to Pinterest
Labels: Frills to Pay the Bills