Here were the contest details:

Warlocks are evil creatures who dabble with the fel magics that most other people stay away from. Obviously this means we have a certain… image.. to uphold. It’s why our tier sets have huge spikes and skulls, and other awesome looking things. A Warlock should look good.
So let’s turn it around. Let’s find the worst possible Warlock outfit available in the game. Something that would make other Warlocks shun you and not let you near them. Something that would make your demon take one look at you and return back to the Twisting Nether laughing all the way.

Rules: Anyone can join in the fun. The outfit doesn’t have to be possible to transmogrify – use your imagination! – but it has to be things that a Warlock can actually wear/use (ie. cloth/daggers etc.)

Submission Date: The cut-off date for submissions will be 25 April, and winners will be announced by the following weekend.

Ok, so I was late and I missed the deadline of April 25th. :( But I really wanted to participate, so I put my outfit together, "knitted" all the stuff, scouted out a location, and this is what I got: 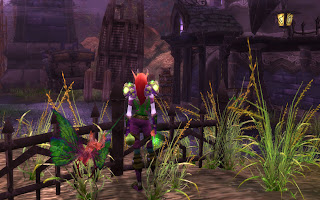 Although the rules stated it didn't need to be transmogable, I did want to put something together that could be, so it would feel more complete. Just the fact of bypassing a shoulder piece makes an outfit seem more casual and less sinister. Ultimately, I like the "I want to look like a sinister warlock" feel to the outfit, yet, the pants and boots make it look more like a melee class as opposed to a casting class, and the little bag of tricks combined with the jerkin says "amateur circus magician" to me.

Email ThisBlogThis!Share to TwitterShare to FacebookShare to Pinterest
Labels: My Contest Submissions